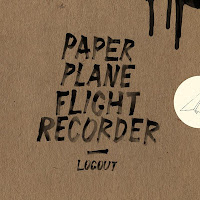 LogOut - Paper Plane Flight Recorder (Inner Ear Records)
This time  I am going to listen to a record by a man called LogOut who says he comes from Whateverland, a suburb of the Universe but when I asked him if he was an alien from another planet he said he only lives there so i don't suppose he is an alien; I think he might really be from Greece because there is Greek writing on his website. Logout came across my reviews and liked them and asked me to review his record so that is what I am doing today.
The first song on the record then is called Departure and is just an ordinary acoustic guitar played over noises of an airport. The guitar playing is nice and light and this is a good way for the record to start and I liked it.
The next song is called Where it Goes and has more of the nice and light guitar playing but with singing this time in a high voice that reminded me a bit of old folk songs played ages ago in the forest around a campfire - This made me remember when I was a little boy about twelve and me and my friend used to build a fire on one of the bomb-sites and cook potatoes except we never used to sing songs we just used to talk about school and girls and things. Later on in the song is the sound of a plane taking off and marching drums and someone singing "Oooooooooooohhh" over and over - It is a very interesting song that I liked listening to very much.

After Where it Goes is a song called Winter + Summer and it's about winter and summer meeting in a bar and falling in love and then falling out of love again because they are too different which is a very good idea for a song. On this one I think LogOut sounds like Lee Hazlewood who is an American singer with a deep voice who was world famous for singing duets with Nancy Sinatra. We have listened to Lee Hazlewood here at the Gate in our music group and one of my favourite songs that i've heard is We All Make The Flowers Grow which you can hear here:


Next is a short song with no words but with the nice guitar, humming, military drumming like they do for the Queen and some wailing and after that is a song called In the Sea of Lonely Souls which i think is a song about a break-up - I think it's sad that relationships break up but it might be better to break up than fight all the time like some people do. This is a nice, sad song that i thought was very good to listen to.
Elliott Days is next and seems to be about an unhappy holiday in Italy. I've never been to Italy but I don't think I'd be unhappy there, I'd travel around and go to Rome and see the Vatican and I'd go on a gondola in Venice and I'd have a nice time - I suppose somebody could be unhappy in Italy though if they didn't like doing those things.
After this is a song called Song of the Selfless where LogOut sings in a high voice like a girls voice about life being his enemy. This must mean he thinks life is against him which is a shame - I don't think life is my enemy because I think I've got a good life and I enjoy it and I wish everybody liked life like I do because then they'd be more happier too; I think the world would be alright if everybody in it were happy.
After Song of the Selfless is another short guitar song without any words, it is a nice bit of music but I wish it was longer because it was nice to listen to and has a nice change around in the middle. Next up after this is a song called Establishment which starts off with guitar and then LogOut starts singing about a woman and asking her not to do him harm. At the end of the song it all goes a bit Russian with lots of shouty la la la singing which made me laugh because I found it funny though also a bit sad; I liked this bit of the song a lot.
The next song is In A Sunday Morning and it's about a miserable sunday morning. I think some people get fed up on sundays because they have to go to work on monday morning or because there is nothing to do on a sunday but I don't get miserable on a sunday because I keep myself occupied  by going to church and then afterwards going to the pub - I liked this one as well even though it's a bit miserable.
An Inside Joke comes next and is a nice song with good guitar playing and then there is the last song called Landing which has two voices on in like a duet between a man and a woman. I think it a love song because they are singing about finding love in the end so I guess since this is the last song that this is a happy ending for the record which I think is very nice.
Overall I would say this was a very good new folk record that I would be happy to recommend to all the people that read my reviews. I would give this record 10 out of 10.
Posted by The Gate at 07:10

Email ThisBlogThis!Share to TwitterShare to FacebookShare to Pinterest
Labels: LogOut 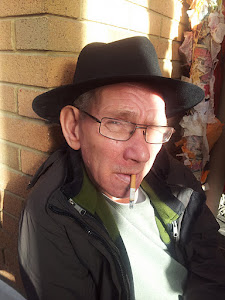